is the first preview of the Tanz*Hotel project Floß*Medusa, which is currently being developed in several stages –
choreography, paintings and composition –
directed by and starring Bert Gstettner, Hannes Mlenek, Günther Rabl, Devi Saha

In MEDUSA*EXPEDIT Gstettner, Mlenek and Rabl perform in the 2.500 square metre wide space of the former Anker Brotfabrik Expedit hall; a choreographic and room accoustic production within the framework of “The Float of Medusa“ theme. Doing so, they try to bring their differing means of expression into relation to each other. 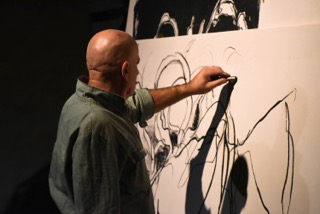 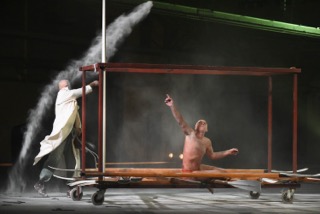 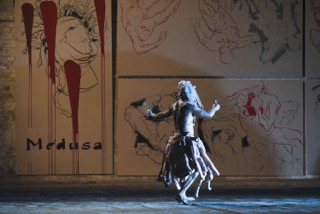 They put themselves on board the frigate Medusa; a ship which ran aground a sandbank off the West African coast in 1816 because of a navigational error. The ship had to be deconstructed to a raft due to the lack of lifeboats on board. For fifteen days, the remaining few of the 150 original crew float aimlessly on the abandoned, rudderless raft. Among the merely eight survivors are J.B. Henri Savigny and Alexander Corréard, who write up an account of the events. From 1816 to 1818 the painter Théodore Géricault created a post revolutionary-romantic, monumental painting, which today is on display in the Louvre in Paris. It is also thanks to this painting that the memory of this humanitarian disaster has lived on and become a warning to future generations.

This project is about human failure in extreme situations. The aim is to relate to this failure, explore connections and from the tragic outcome finally create a positive turn into a future free of human-made disasters. The tragedy serves as an impetus to ask ourselves, especially in the light of recent events: how best do we handle news about the fate of refugees and the crime of people smuggling reaching us on a daily basis? How can we improve the situation of those suffering?

MEDUSA*EXPEDIT currently is a “Work in Process“ and for the time being will remain an exclusive performance – a preview of materials, sketches and elements of our research for the larger Tanz*Hotel project FLOSS*MEDUSA. In 2016, the 200 memorial year of the shipwreck, the next part will be released in an enhanced version.